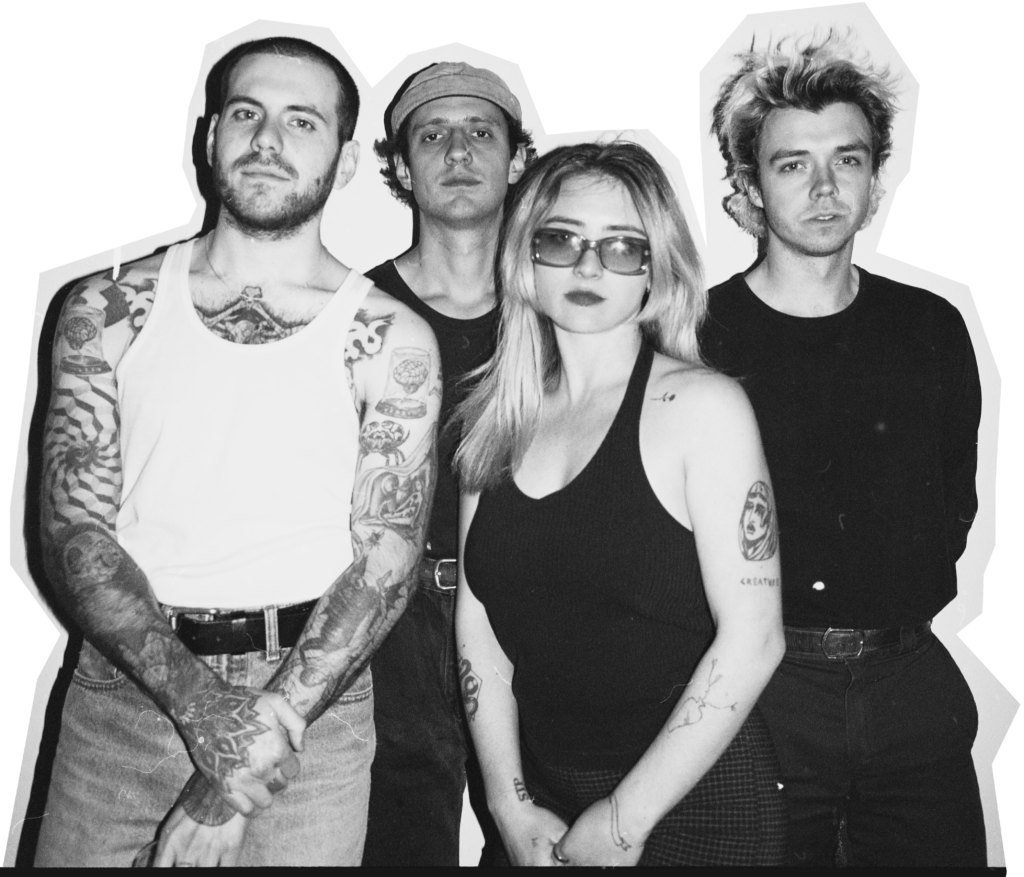 Frigs, hailing from Toronto, Canada, may have an album called Basic Behaviour, but the band is far from being basic. Singer Bria is mostly compared to the likes of PJ Harvey and Sonic Youth. And even though we don’t like comparing girls to female musicians only, hearing and watching Bria sing instantly reminded us of another – much different to Kim Gordon – cool girl. With her strong look, intense voice and platinum blonde hair she resembles a post-punk version of Gwen Stefani, and that is a pretty huge compliment, coming from our teenage selves. The ultimate self-assured cool girl (as is the rest of the band by the way – very cool, we mean). It’s a look we can only strive to achieve. One of the things we noticed about their album were the song titles. Names like Doghead and Talking Pictures sparked our fantasy about their origin, so we tried to get to know the band a bit better by questioning them based on these titles. It turned out to be the exact refreshing, different way of interviewing we all needed after their powerful, vivid show in Amsterdam.

DOGHEAD
Q: If you’d play with dog heads on stage, which dog breed would you be?
Kris: “A Bo Mastiff, because they are big and strong and lean and I like that.
Duncan: I feel like this is going to be a joined answer with Bria. I’d go with the Vizsla.”
– Bria starts laughing –
Bria: “That was the dog I used to have, a Hungarian Vizsla. But that wouldn’t be the dog head I would have now. Mine would be a little poodle. Because nobody would expect it to be more than a little bitch. But secretly they are very vicious. But I’d also really like to be a Doberman. They look so good.”
Lucas: “Mine’s a hound for sure. Big, floppy ears.”

TALKING PICTURES
Q: If you could make one picture/image/painting talk, which one would it be? And what would it say?
Bria: “That botched restoration of the fresco Ecce Homo (Behold the Man) by that little old lady in Spain. I’d like to know what the fuck that picture would say about looking like that now. I want to know what that expression would sound like in a voice.”
Duncan: “There’s this picture of John Cusack, Johnny Depp and Hunter S. Thompson in a convertible. They seem like they are having a fine evening together. I’d really like to know what they were talking about then. I’m a big fan of them all individually and even more together.”
Kris: “I would really like to know what sound the guy on the cover of ‘In the Court of the Crimson King’ by King Crimson makes. It’s probably a pretty cool sound.”

WASTE
Q: What is always a waste of time?
Bria: “Playing in a band… Just kidding. Making jokes on tour is pretty good.”
Duncan: “You mean a good waste of time? When you’re in a touring band it’s definitely sitting on a toilet. You do it several times a day, and it’s sort of hiding from the rest of the band that you’re with all the time.”
Kris: “Sitting and waiting and looking at your phone.”
Bria: “Lukas has a pretty specific waste of time…”
Lukas: “Oh no… Ok, I’ll tell. It’s a golf game on my phone. It’s called Golf Clash. It’s online and you play against friends. It was a problem at a certain point, like an addiction. I started not enjoying it. Bad waste of time.”
Kris: “He also writes Google reviews.”
Lukas: “Can we change it to a positive one? What we really like to enjoy as a band together is listening to Women & Songs-CDs. It’s a Canadian thing, a CD compilation they used to put out. It has Céline Dion on it, very 90s.”
Bria: “YES. The first one is the best one. Alanis Morissette.”

SOLID STATE
Q: What makes you melt?
All together: “LeAnn Rimes.”
Bria: “Maybe Céline Dion though. And DeAngelo. But that’s private.”
Kris: “A sick acid trip. That makes you feel like you’re melting.”
Lukas: “Ciara Kiely and MDMA.”

GEMINI
Q: What is the biggest contradiction within the band?
Duncan: “Kris. It’s Kris. Because he is a Gemini. The song is about him.”

I
Q: Can you tell us your best anecdote about the band?
Bria: “We went to Jekyll Island, in Georgia, USA, for a short vacation. It was a seven weeks long tour and we had two days off there. It turned out to be a very Republican golf island – needless to say we stood out a bit. One evening, the first evening we got there, we all proceeded to have a few drinks with our British friend, who was also there. – His name is Cal Mcrae, he needs to be mentioned because he was the instigator in this. – Me, Cal and Kris went to sleep only to be woken up at four in the morning by the bartender, who had Lukas with him. Lukas was very drunk and in a wheelchair. Only for movement purposes though, he wasn’t necessarily injured. I asked where Duncan was, since they are mostly together, but they couldn’t really answer. So I sent Kris and Cal down to see where he was. Turns out Duncan had also gotten quite drunk, with some very white, Republican golf guys, who were very scary. At one point in the conversation they were making very inappropriate and racist comments and Duncan called Donald Trump a fascist. As a result of that, they actually assaulted him. Long story short after that: we were paid 300 US dollars by the golf club to leave Jekyll Island as soon as possible. So first thing next morning we got in the van and went to Savanna. It was very strange. However we did GAIN money that vacation, and our hotels were paid for.”

II
Q: What’s your second best anecdote?
Duncan (sighs deeply): “I don’t know for sure what to share and not share. Maybe the sex club in Berlin? Lukas can tell you about that.”
Bria: “We were in Berlin last year and we went out drinking, we were in a club called Tresor. It wasn’t that exciting so we went looking for something else. We ended up in Kit Kat, a techno sex club. Kris, Duncan and I walked in with our winter jackets but felt really out of place, so the guys took off their shirt and I shimmied my shirt down my shoulders. It was very fun inside. We got flogged. It was some very professional flogging. This woman knew what she was doing.”
Duncan: “It felt quite therapeutic to me. At that moment it didn’t feel sexual at all. I also had some body paint done.”

HEAVYWEIGHTS
Q: The Cambridge Dictionary told us a heavyweight is a person or thing that is important or serious and that other people like. Who or what is that for you?
Bria: “I have an answer to this for the whole band. I’ll say Dan Burke, right guys?”
– rest of the bands agrees immediately –
“Dan Burke is an infamous Toronto promoter, who really helped us start out. He’s infamous because he used to be kind of a wild man and was very openly addicted to crack for a long time. He was also a well-established writer who exposed a very intense mafia chain in Montreal. There’s all sorts of wild stories about him, promoting shows in Toronto. One is about John Dwyer playing a show there – there’s video of it on Youtube – breaking his guitar over Dan Burke’s head. John and his band started setting up while another band was still playing on stage. Dan tried to grab them to stop doing it when John stood up on an amp and smashed his guitar on Dan’s head. You could hear his head crack, it was very gross. Afterwards John Dwyer actually put that guitar on auction on eBay, for a good cause. It was listed as ‘The Guitar that I Broke over Dan Burke, Toronto Promoter’s Head’. Dan is a great promoter, we love him.”

CHEST
Q: What was the last thing you had to get off your chest?
Bria: “I don’t like fish and chips. I just recently realized that and when I said it out loud it felt very good. I tried it but I really don’t.”
Duncan: “I ate twenty croquettes.”

TRASHYARD
Q: What does your trashyard look like?
Bria: “I can picture it perfectly. It’s a mountain of crumpled up tissue papers, sprinkled with some cigarette butts. Maybe with some bottles of white wine laying around. I have this thing where I constantly crumple up tissue papers, like an old woman. I now even need to sleep holding one. I don’t even necessarily blow my nose with them, I’ll just take one to fall asleep and hold it. It’s gross. They are everywhere, all over the van too.”
Kris: “Chicken wing bones.”
Duncan: “It’s a really lame answer but: guitar strings. I break them all the time. I broke one tonight on stage. I go through like eight or nine per tour.”
Lucas: “That’ll be clothes. Sweaty T-shirts. I sweat a lot on stage.”