ON THE ART OF CREATING

We’ve crossed paths with Drahla, the trio from Leeds, a couple of times now. Each time the conversation turned pretty much to the same thing: our shared love/hate relationship with social media, and the link between art and music. This time we meet them before playing in Rotterdam, having dinner at Rotown’s backstage café. One thing we learned there: don’t order the burrito if your stomach isn’t too solid. As one of the band members ran to the toilet pretty fast after his first couple of bites, and missed half the interview. Although we’ve heard that he does have that more often, you are warned anyway.

To start the actual interview, we move from the inside to a picnic table at the edge of Rotown’s terrace. We brought a canvas and some charcoal for them to draw on while doing the interview. We order some more beers.

When working on either your art or your music, do you need to be in a certain mindset?

Rob: “I definitely have to be in a mindset to make something creative, but that doesn’t mean that it has to take long. Sometimes the best things come to you in just ten minutes, sometimes you make pretty cool stuff all day long.”

Luciel agrees: “Normally we don’t really plan ahead any of our creative work. But the artwork for the album did have a deadline, that was the first time I’ve worked on art in a bit of a different way than just letting it come to me. But I did already give it a lot of thought in my mind before starting too. It turns out I’m pretty good with deadlines, even creatively.”

What inspires you to be creative?

Rob: “I force myself to be creative sometimes. By, for example, rehearsing with the band every day. The locations vary, we’ve even practiced in kitchens. But we do want to keep stimulating ourselves and play as often as we can. It’s about using your time properly and in that timeframe try your best. We only stop to get lunch. It’s the same with other forms of art, sometimes you have to push yourself a bit, that doesn’t mean you are not good at it. Nobody has only perfect days of creating.”
Luciel: “On tour we do try to see some museums or galleries if we have any time. But unfortunately that rarely happens. I really love the artist Cy Twombly. He’s an American painter, sculptor and photographer. You might recognize a bit of his style on our artwork as well. I do hope we will get some more free time on our next tour. I’d love to see some modern museums in different cities. We do try to make the most out of it. When we don’t have time to see any museums, I also really like looking at the architecture of the places we play in. Just wander around for a bit and really look, like above your head, that can be super inspiring.”

Mikey: “For architecture I really love New York and its buildings. I also like the smell for some reason.” He laughs. Looking at your lyrics and other visual work you’ve made for the band (like the video for ‘Twelve Divisions of the Day’) we see some pretty political and current-time critics on our society. Is this something you give a lot of thought?

Luciel: “Fictional Decision, with lyrics like ‘there’s a wall between us’, is quite different from for example ‘Twelve divisions of the Day’ in where we are not that literal at all. So I can’t really say that there’s one thing special that is on our mind or that we want to speak of explicitly. In ‘Twelve Divisions’ we are reviewing what it means to have a route in your work process. Doing the same thing, day in and day out. While working on it we were all working fulltime jobs and it’s really reflective of that monotonous cycle you fall into.”

What was your conclusion about those kind of days?

”For us it was definitely negative,” Luciel directly speaks for the group. The guys nod in agreement. ”I got sort of lucky by finding out that working two really different jobs works best for me. That keeps my time kind of interesting. But I was, and I am, also constantly tired when working multiple jobs.”

Rob: ”At one point I worked at a place where I was really just a number, not really a living, breathing person. There were no windows, it was pretty bad. I now try to work only at places that make me feel good, I need to be able to breathe, quite literally too,” he adds laughing.
Mikey: ”I worked at a warehouse that got shut down when the manager had to go to prison. It was his parents business but it had to close immediately. The company was basically purposely sending out personnel to sell shit to older people, and they got really intimidating if they didn’t. They pressured them into buying loads of stuff. I worked there for maybe one and a half year, but it didn’t feel good at all.” 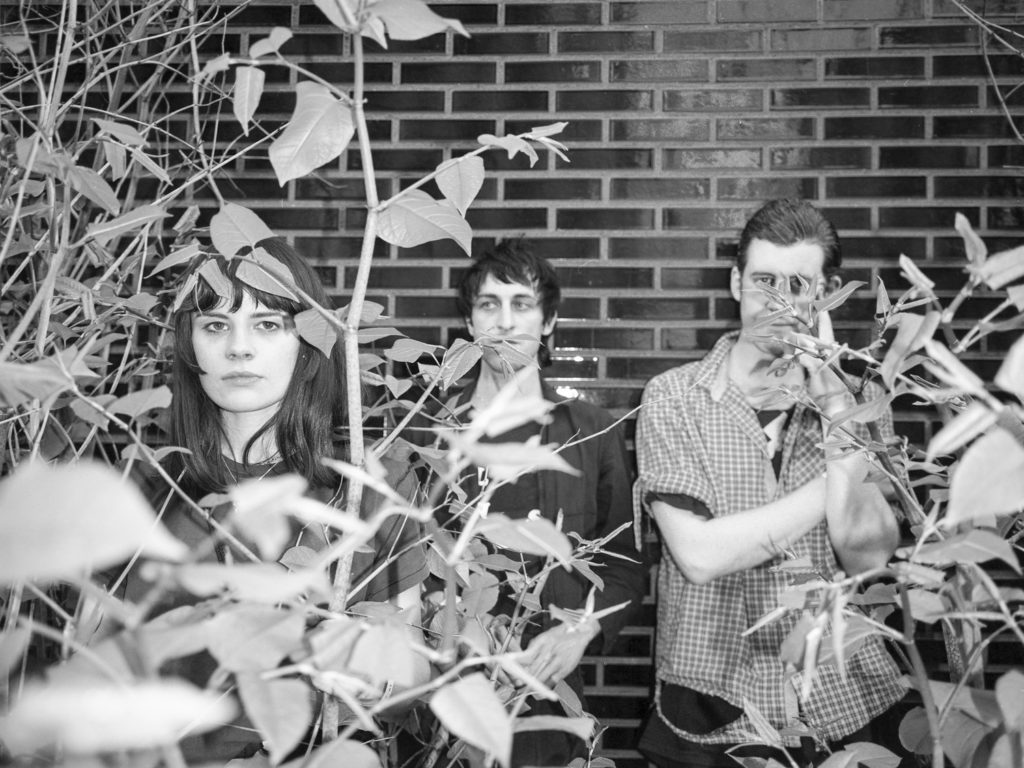 Both your artwork and lyrics feel intense but are also pretty constrained, maybe even limited. Are you holding back parts of your thoughts and opinions, maybe for later on?

”It’s just our limited view and opinion of the world, I think,” Luciel starts. ”I’m actually not that much political at all. So that’s why it might feel limited to some. It’s not based on endless knowledge or research or something. I think I should, and could, be a lot more political. But the news triggers me too much. I only read the headlines to be honest. For Rob and me it’s a conscious decision not to have a tv in our flat. Mikey is a better in that, I’d say…”

Mikey silently shakes his head in disagreement but doesn’t add anything at this point.

Luciel: ”It’s probably more of a general awareness. It’s society and what’s going on, and you can’t really ignore the fact that things are changing and people are somewhat emotional about it. You feel it all around you and you talk about it with your friends. At least we really do. So our work is actually more based on feelings then actual facts. We also don’t really use a lot of social media. We just got it for the band, to promote.”

Mike: “It’s a good tool to find out where the good gigs are. And sometimes you will find about a show or new band you would have missed otherwise. That is a good thing about it. But looking at your feed any other day makes you enslaved to it.”

Rob acknowledges:  ”It’s a pretty horrible thing to be addicted to a machine, isn’t it?”

Luciel:  ”It’s super creepy to feel watched by companies. You google something you want to buy just once, and you will only see ads for that specific thing after. It’s literally like George Orwell’s 1984. I found that book really inspiring. We are indisputably going in that direction. He already wrote about it.”

Rob: ”We actually had something on our band’s Facebook page yesterday that was really strange. It was by somebody that none of us knew, posting about the band with a photo that a friend of us took privately. She didn’t knew that person either or knew how she got that photograph. Nobody knew where it came from. We deleted it as soon as we saw it. Our artwork also doesn’t really profit much from social media. A lot of people repost it, but alter it, use a filter or cut off a piece. It doesn’t do the art any justice, it changes it into a strange, altered version of it. Like that person wishes too. And that’s exactly what these socials do, they make everything so easy that it loses its value. It’s disrespectful, and that does make me a bit sad.”

Since you are clearly not a big fan of the digital world, is there going to be a physical exhibition of the work you made for the band?

“Yes, ideally we would love to do that.” Rob clearly lights up by the thought of it. “It’s something that we are hopefully able to do pretty soon. We’re going to try to do something like that for the release of the album. We’ve also been talking about a follow-up on our first zine. To put out as a follow up, an extension of the album itself.”

”The work we did for the album actually came really natural,” Luciel goes on. ”Everything is made by me and Rob, mainly just at home. It came to us without too much forward thinking of how we wanted it to be. We just started and it was a really natural process. We never doubted that we had to do our own artwork. We’ve also done separate artwork before the band, it interests us just as much as music does. For me it’s about an overall aesthetic, both visual and musical, that makes it ultimately the most interesting thing. The artwork always comes after making the music though. It’s quite reflective of what we are doing. Like a summary of the feeling that our music gives us.”

Rob: ”Technically we probably know more about (making) art than about making music, but I think that’s a good thing. I like that our music doesn’t sound too worked out and structured. We don’t even really know if we play our instruments right, but it does feel good, and that is the most important thing to me. Being intuitive is way more interesting than following the rules anyway.” 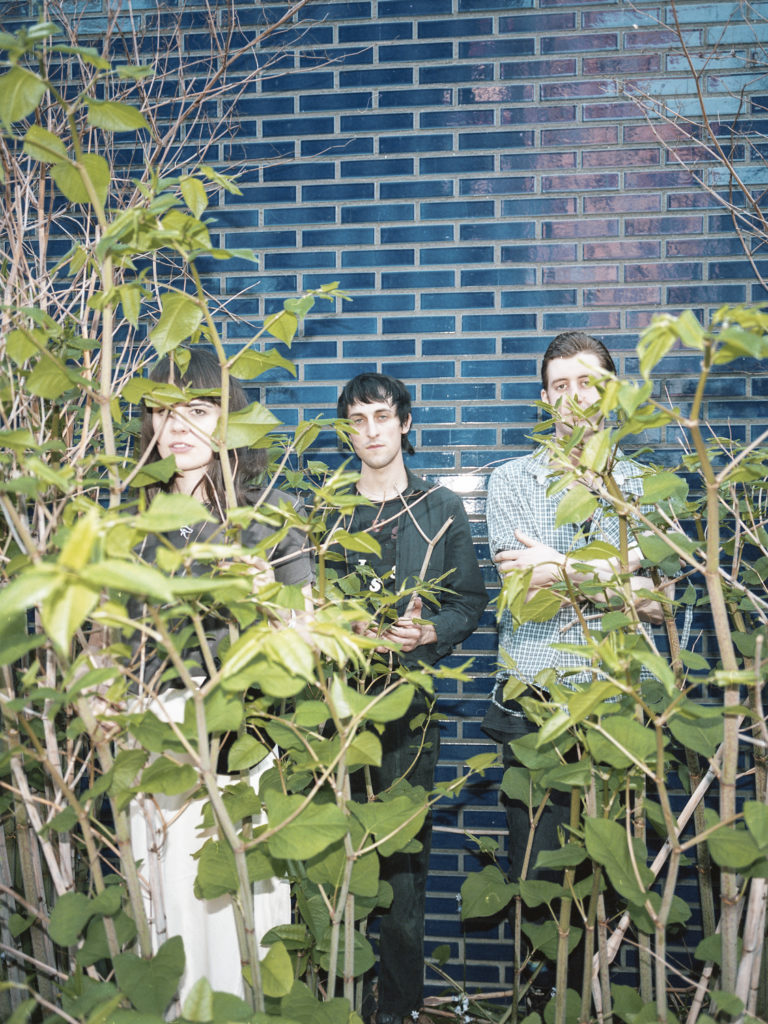 Drahla’s album ‘Useless Coordinates’ was released on May 3rd. We are curious to hear whether Luciel, Rob and Mike had their exhibition together with the album release and how their zine –we love zines!!!– is coming along. You can listen to the album online, find it on their socials and get sponsored ads to buy it online at big companies. It is all in the range of possibilities and find the links to do this below. BUT – if this article has got you thinking and you dig the music, we recommend you get your physical copy at your local record store and go see this band live. Next time we will see one Drahla play is at an old Amsterdam dockyard. Industrial feel to it, graffiti on the walls and the stage outside in between these sheds and the water. When taking the ferry there, look around you to see a wide range of architecture along the water’s edge until you arrive at the stranded submarine and an impressive mural. We might go offline for a day on June 23rd, while making the most of it and letting loose till it ends.